Get a petrol. Modern EU6 diesels really don’t work well for constant short journeys. You’ll be faced with DPF filter issues unless you can do regular long runs at DPF regen speeds.
Top

Hi
just had our updates done regarding oil dilution, hoping now ok, we had oil changed at 2500miles free of charge, 8ooo miles now with issue but hopefully sorted, they picked up car and dropped it back all nice and sparkly, all thanks to Marshals of Didcot, we love the car.
disco5 silicon silver, 3ltrD, luxury, black rails and sidesteps.
Top

Just had my HSE TD6 in for an unrelated issue and they told me that they had to change the oil due to this dilution issue too. The service attendant told me it shows diesel in the oil, is that right? Im not too sure how a dpf works, but it seems a bit confusing that foreign material can get in the oil and be fixed by software??? Anyway, i wasnt charged, but he did say that might not always be the case - the car has done 9,750kms and i tow a ski boat long distances fairly regularly. So not short trips generally.

On a seperate note, a sealed timing belt tension pulley had run dry and needed replacement, which was done under warranty. Had that let go it could have been all over for my engine. Not very nice to think.
Top

I had similar issue with my Disco 5... It reported that a Service was required after only completed 3500 miles. Visited dealer who reported that the oil had thinned due to much town driving. Dealer changed oil and filter at no charge and I drove away. However, I stopped after 5 miles to refuel and when I restarted it reported I needed a service in the next 1500 miles.
I returned to the Dealer and inquired why I need another service so soon.
The Dealer told me not worry and it will sort itself out in a few days!
Well it didn't, contracted the Dealer again who booked the vehicle in for two days to sort problem.
Just collected the vehicle and the Service issue seems to be sorted, but time will tell.

Will keep you posted.
Top

Will wrote: ↑
Wed May 16, 2018 9:38 am
The service attendant told me it shows diesel in the oil, is that right? Im not too sure how a dpf works, but it seems a bit confusing that foreign material can get in the oil and be fixed by software 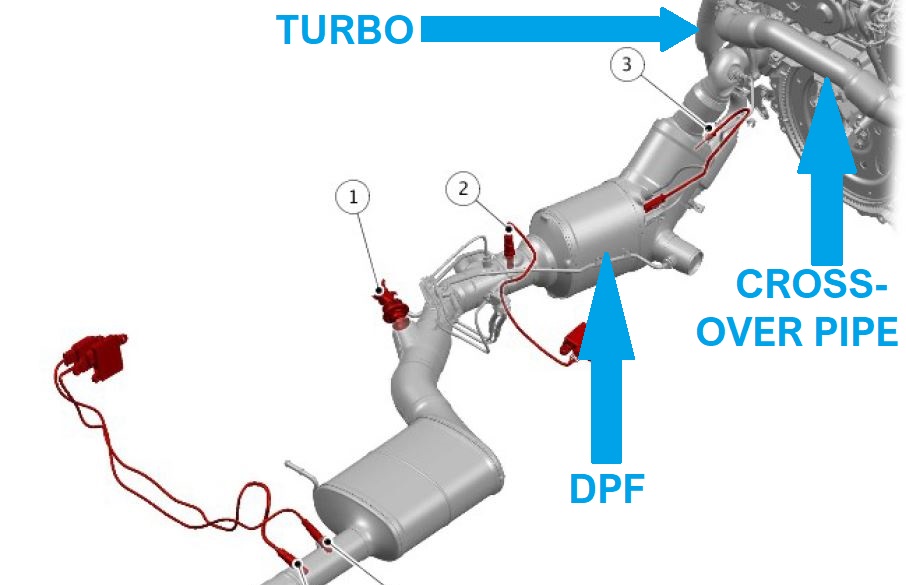 The service attendant is correct.

Diesel fuel is escaping from the engine cylinders into the engine lubricant, thus reducing its viscosity, due to a process called "post injection"; on the L-462 D5 the problem is known to affect only the 258HP 3.0L TDV6, the power unit that was withdrawn from sale during the past 2 weeks.

A single DPF, located just behind the diesel oxidation catalyst (DOC), collects unburnt hydro-carbon molecules (HC) and soot particles (PM), preventing their unprocessed discharge into the atmosphere. When the filter is full these so-called HC/PM deposits must be incinerated at high temperature (853-873 K) leaving just a mixture of CO2 and water which is flushed overboard through the exhaust pipe. This process is referred to as "active regeneration" of the DPF and it is achieved by injecting extra diesel fuel into each cylinder during the exhaust stroke (that's the post injection). The resultant plume of fuel-rich exhaust gas then flows through the turbo charger to the DOC where it combines with oxygen creating large amounts of thermal energy which heats up the DPF and "burns off" the HC/PM.

For some (as yet unknown) reason connected with the "hardware and architecture" of this exhaust system, active regeneration has to run more frequently - and for a longer period each time - than it was designed for, raising the probability that an active regeneration will not have time to complete before the current journey ends. This means that the process must be started again when the vehicle is next driven and, because there is a significant "warm up" period for active regeneration, the process can't just restart where it left off when it was interrupted. Where a vehicle is subjected to a sequence of short journeys with aborted regenerations a vicious spiral can soon develop resulting in a blocked DPF which might need a "forced regeneration" or in the worst case a trip to the dealership for a new DPF.

The post-injection of diesel fuel into the engine cylinders comes at a high cost. The cylinder walls are coated in a permanent protective oil film which prevents the piston rings and cylinder bores from coming into physical contact. But some molecules of the extra diesel used for active regeneration of the DPF become adsorbed into the oil film and are then scraped off (taking some of the precious lubricant with them) into the engine sump. It's only a few molecules at a time but with 6 cylinders performing 120 exhaust strokes per second at 2,400 RPM the rate of diesel accumulation into the engine oil is actually quite significant. The car's software makes a conservative estimate of the fuel-in-oil dilution (FIO) percentage based on the known quantity of diesel being injected during each post-injection event. When this reaches 6.1% (equivalent to half a litre of diesel or about 1 part in 16) the engine oil needs to be changed to protect the moving parts. The Service Required indicator displays the mileage to go until this point will be reached based on recent post injection activity and other factors such as date since last service.

Following the recent withdrawal of the TDV6 engine option some think that a proper solution to this issue is now unlikely because it would divert valuable engineering resources to fixing a badly designed exhaust system which is now obsolete. According to this interpretation, JLR no longer needs to fix the problem because it has limited its financial exposure in a different way by capping the number of affected cars. Other owners hope and trust that JLR will look after its existing customers and will soon release modified versions of the software responsible for managing the emissions control system - particularly the part that controls active regeneration of the DPF. In this more optimistic interpretation, the software just needs a few adjustments to manage DPF cleaning more efficiently, limiting the length and frequency of the active regeneration/post injection events, or possibly fine-tuning the timing and duration of each burst of diesel injection to gain a similar advantage. Sceptics maintain that any change to the software will in any event only be concerned with increasing the dilution trigger point in order to stretch the service interval to something that affected owners will find more acceptable. If this turns out to be true, it could lead to a double-digit dilution percentage trigger, equivalent to about one part diesel in nine parts of oil.

Hi
Had mine serviced in March,( first service), I have done 3500 more miles and it’s telling me it wants a service in 2800 miles. Just been back onto the dealer they are taking it in again. This is the 3rd time under warranty. Also since the software upgrade at the service the reversing camera’s are intermittent. I do wish I’d bought the 3l petrol instead of the diesel. I knew there would be teething problems buying new but this is getting past a joke.
Top

Doberman wrote: ↑
Mon Jun 04, 2018 3:36 pm
Hi
Had mine serviced in March,( first service), I have done 3500 more miles and it’s telling me it wants a service in 2800 miles. Just been back onto the dealer they are taking it in again. This is the 3rd time under warranty. Also since the software upgrade at the service the reversing camera’s are intermittent. I do wish I’d bought the 3l petrol instead of the diesel. I knew there would be teething problems buying new but this is getting past a joke.

Email from the Customer Experience Centre sent to a DS owner yesterday contained this cautionary note:
"As a Service Plan has been taken out on your vehicle, any oil and filter changes that are required on your vehicle prior to a service will be covered free of charge as a goodwill gesture, providing your vehicle is within its 3 year manufacturer’s warranty. Outside of the manufacturers warranty this would need to be assessed on a case by case basis."
Top

I have a Disco 5 which required an oil and filter change at 3700 miles from new.

This was completed but I was informed the engine lubricating oil was contaminated by fuel well above the acceptable limit.

I have been told by Landrover customer service it’s my driving style that is causing the problem. They said the dealer should have advised me that the vehicle is only suitable for extended journeys where I have to drive at 70 mph for at least 40 minutes. In my opinion this makes the car virtually useless and unfit for purpose. Has anyone managed to get a refund...? I’ve used the vehicle for mostly long journeys but this has not prevented the oil contamination.
Top

This oil issues are not a software problem

It’s actual co tamination of the oil and according to a LR document sent to the dealers will lead to engine failure - not might or could.

The engine oil contaminated with fuel will cause increased wear and deterioration.
Top

I have the same opinion. This is totally outrageous by JLR, even today you can download a document from their website "DIESEL OR PETROL - Making an informed choice". In that document it says "I live in a town outside a major city and regularly commute by motorway into the city" for which the advice is "CONSIDER DEISEL". In that entire document, whose purpose is to make an informed choice, no mention of this advice.

Any other people suffering this issue ? Anyone successfully rejected the vehicle and had a replacement on this basis ?
Top
Post Reply
52 posts

Our Discovery 5 Forums are free to join and open to all.